Uphold the Rights of Senior Citizens 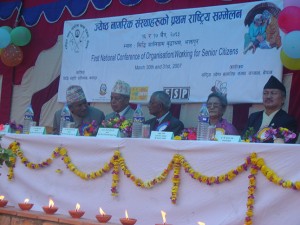 Ageing is a natural phenomenon and an inevitable process, which occurs in human life cycle. Average life expectancy at birth has moved up significantly and the population of the elderly persons has been increasing over the years. In Nepal, the population above  60 years of age comprised 9 percent (2.5 million population) of total population according to  the Population Census of 2011. In the world, number of the aged (60+) is 760 million at present and this figure is estimated to reach 2 billion in  2050 A.D.. The senior citizens constitute a precious reservoir of such human resource as is gifted with knowledge of various sorts, varied experiences and deep insights.

It is for the first time in human history that societies are faced with new opportunities and challenges resulting from ever increasing population of the Senior Citizens. We can make better use of opportunities and effectively meet challenges if we are organized. So, it was necessary to come up with a means that would make such concerted effort a possibility. In this connection, National Senior Citizen Federation (NASCIF) is such a means to operate at the national level with its strong base at the grassroots level and respectable standing  at the international level.

NASCIF has recently (on December 27, 2011) been established as an umbrella organization with  the main objective of  protecting the rights, welfare and the best interests of senior citizens in the country.  NASCIF replaced National Senior Citizens Organizations’ Network, Nepal (NSCONN) which was founded in 2003. In a short span, NASCIF has established  District Associations of Senior Citizens in more than 65 districts in all the five development regions of  the country.

NASCIF is also a national network of the social organizations working for upholding the rights of the senior citizens across the country. It is duly registered with the District Administration Office, Kathmandu (Regd. 658/2068 B.S.)  in December 2011 and subsequently affiliated to Social Welfare Council of Nepal.

NASCIF envisions a society where senior citizens will be living secure and dignified lives with peace.

NASCIF strives for making difference on the lives of senior citizens through providing immediate services and advocacy  for comprehensive protection policy and its proper implementation by the government.